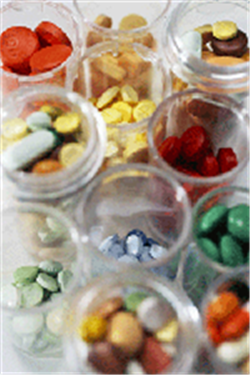 (Actaea racemosa, Cimicifuga racemosa) This herb has received quite a bit of scientific attention for its possible effects on hot flashes. Studies of its effectiveness in reducing hot flashes have produced mixed results. However, some women report that it has helped them. Recent research suggests that black cohosh does not act like estrogen, as once thought. This reduces concerns about its effect on hormone-sensitive tissue (eg, uterus, breast). Black cohosh has had a good safety record over a number of years. There have been reports linking black cohosh to liver problems, and this connection continues to be studied.

(Trifolium pratense) In five controlled studies, no consistent or conclusive evidence was found that red clover leaf extract reduces hot flashes. As with black cohosh, however, some women claim that red clover has helped them. Studies report few side effects and no serious health problems with use. But studies in animals have raised concerns that red clover might have harmful effects on hormone-sensitive tissue.

(Angelica sinensis) Dong quai has been used in Traditional Chinese Medicine to treat gynecologic conditions for more than 1,200 years. Yet only one randomized clinical study of dong quai has been conducted to determine its effects on hot flashes, and this botanical therapy was not found to be useful in reducing them. Some experts on Chinese medicine point out that the preparation studied was not the same as they use in practice. Dong quai should never be used by women with fibroids or blood-clotting problems such as hemophilia, or by women taking drugs that affect clotting such as warfarin (Coumadin) as bleeding complications can result.

(Panax ginseng or Panax quinquefolius) Research has shown that ginseng may help with some menopausal symptoms, such as mood symptoms and sleep disturbances, and with one’s overall sense of well-being. However, it has not been found to be helpful for hot flashes.

(Piper methysticum) Kava may decrease anxiety, but there is no evidence that it decreases hot flashes. It is important to note that kava has been associated with liver disease. The FDA has issued a warning to patients and providers about kava because of its potential to damage the liver. Because of this concern, Health Canada does not allow kava to be sold in Canada.

(Oenothera biennis) This botanical is also promoted to relieve hot flashes. However, the only randomized, placebo-controlled study (in only 56 women) found no benefit over placebo (mock medication). Reported side effects include inflammation, problems with blood clotting and the immune system, nausea, and diarrhea. It has been shown to induce seizures in patients diagnosed with schizophrenia who are taking antipsychotic medication. Evening primrose oil should not be used with anticoagulants or phenothiazines (a type of psychotherapeutic agent).

Of course, as with all therapies, there are some risks involved. The public usually takes herbal therapies in the form of supplement pills, not as a preparation made directly from the herb by a trained herbalist. Keep in mind that herbal supplements are not as closely regulated as prescription drugs. The amount of herbal product, quality, safety, and purity may vary between brands or even between batches of the same brand. Herbal therapies may also interact with prescription dugs, resulting in dramatic changes in the effect of the botanical, the drug, or both. To be safe, tell your healthcare provider about all botanical therapies you are considering and always stop all herbal treatments at least 2 weeks before any planned surgery.

More information about herbal products can be found at HerbMed and the NIH National Center for Complementary and Alternative Medicine.